With Active Release Techniques now YOU can

Dr. Michael Leahy, ART founder states: “You know, I don’t ask people to believe what the success rate is because it’s almost too good to be true. So I let the treatment experience speak for itself. If someone has had an injury that’s taking a long time to heal — or if they’ve been told they had to live with a problem or even have surgery — the only thing that’s really going to prove the efficacy of ART is for me to fix them right away. It doesn’t matter what anyone has said; the proof is in the fixing.” (1)

When your muscles, tendons, ligaments, and other soft tissues get injured by overuse or impact, your body produces tough, dense scar tissue around the affected area, which shortens the tissue and causes inflammation in the joints.The result is dull and/or sharp pain from decreased blood and oxygen flow to the tissue, entrapped nerves, and parts of the body that can’t move normally.

Resolve the core problem … not just the symptoms

After identifying the root cause of your pain – versus just treating symptoms – I combine Active Release Techniques and massage to release your muscles, tendons, ligaments, fascia, and at times, nerves from their “stuck” condition and put an end to your “cumulative injury cycle.” 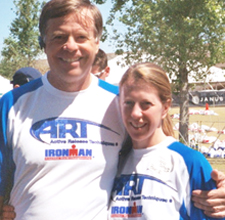 Active Release Techniques was described in a Runner’s World article as “…a rigorous and interactive form of massage therapy in which a practitioner applies pressure to the affected area while moving the surrounding muscles through a full range of motion.” While I personally don’t believe that ART is anything like a typical massage or even a “deep tissue” massage (it is less painful!), it does work with soft tissue and is another modality for someone specializing in treating soft tissue injuries.

Active Release Techniques combined with massage can help you resolve and avoid injury, pain, and even surgery.

Call today before your pain gets worse or radiates to another part of your body or worse, your doctor says you need surgery.